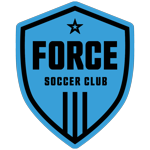 The Force is recognized for the technical and tactical development of individual players for the sole purpose of advancing them to play at one of the more than three thousand universities and colleges sponsoring intercollegiate soccer programs within the United States.

The Force accomplishes this significant goal by providing the highest quality training utilizing a scientific curriculum and competing against some of the toughest opposition in the country.  Additionally, the Club has established a strong reputation and track record for producing collegiate quality players over the past several years.

From 2008 to the present, the Force has accomplished 93% success rate of moving its elite players on to compete at the college level. Furthermore, the Force has developed a comprehensive network of college coach relationships to facilitate the advancement of Force players to colleges and universities across the nation. This network provides a huge advantage for Force players in what is known to be a very competitive college recruiting environment.

Because of the Force Club's strong conviction to the player development process, the Force has become one of the preeminent college placement soccer clubs in the nation.