As Development Academy Clubs, De Anza Force & California Thorns are mandated by U.S. Soccer to provide a Futsal program through the winter months. The main reason behind this requirement is to help players improve awareness, comfort with the ball, and confidence.

Our Futsal winter program allows players to enjoy the challenge of playing fast paced with skill-oriented matches while allowing them to experiment and express themselves freely with less coach direction.

This 2 month program will help players improve their skill and competitive edge through the winter.

Exact schedule will be published once it is finalized.

Games will be played inside the Gymnasium at San Jose City College or Moreland Middle School. Indoor shoes will be required to play.

FUN – Players enjoy the challenge of playing fast paced, skill oriented game that tests their abilities while allowing them to experiment and express themselves freely.

BALL TOUCHES – Accordingly to a FIFA report, in an average 40 minute Futsal contest a player will touch the ball every 30 seconds and have an average of 8 touches.

AWARENESS – Play is continuous with quick restarts and an open flow.

SPEED OF PLAY – Due to limited space and constant pressure players learn to increase their perception.

SUPPORT – Attacking and defending. With only 5 players per team, players will instinctively learn better spacing, provide passing options, and movement.

KNOWLEDGE – A team of four players plus a GK replicates all the basic elements of full sided soccer. A player’s understanding of options and support are enhanced while increasing overall knowledge.

We will provide confirmation of teams and leagues for all Force/Thorns players and finalize schedules as our coaches compile rosters, with teams playing in-house futsal with the guidance of our coaches each game day. 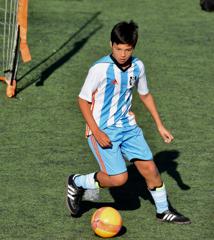